Well not content with attempting to ripoff everything else that Apple does, our friends in Redmond have opened a retail store.

Consider the irony then that first member of staff to meet customers as they came in the door was this person looking the antithesis of an Apple Store staff member: 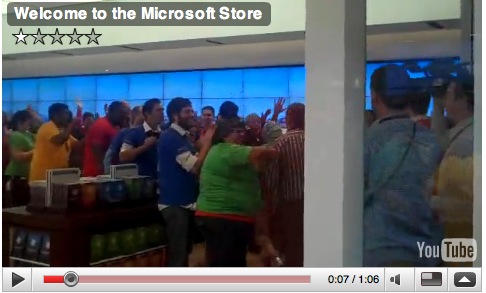 Now, I am not renowned for being slim, quite the opposite in fact, I have been eating quite a number of pies over the last 20 years which has left me decidedly portly, however this was the opening of Microsoft’s first retail store, an event that would garner attention from all over the world. The PR guys at microsoft would have wanted it to look cool, hip and trendy. Millions have been spent on faux wooden tables and shelved to make it not quite but almost like an Apple store, the good and great of the industry press gathered to usher in a new world retail order.

Why then would they place porky here at the beginning of the line of employees to greet (on camera) the first customers. Nothing says Fat Geek like an ill fitting T-Shirt and rolls of fat bouncing up and down.

Good on Microsoft for not caring what their employees look like. I think bonus point should be given to them for being an equal opportunity employer. As a fat geek myself, I salute you (and you porky).