Anyone who knows me well will tell you I am quite a sceptical guy. I don’t believe in any form of mysticism including (but not exclusively) any religion, magic, psy or anything else that cannot be explained by science.

I will entertain the idea that science does not have all the answers. Breakthroughs are being made everyday that previous generations would have said were acts of wizadry or gods. However the things that we don’t understand are just that. I think I have quoted Clark’s “Any sufficiently advanced technology is indistinguishable from magic.” before but I think it is very true.

Some time ago, I was visiting the local mall in Romford, Essex called the Brewery to see a fim. Through the windows was a spectacular view of a glorious sunset. I thought I’d take a picture of the sunset with my new iPhone so I snapped a shot. My son, Adam also took a picture with his Nokia 8500 phone.

It was only when I reviewed the picture later I discovered there were some dots on the image which were also on Adams picture.

I don’t think they are lens aberrations or reflections on the window as both my and Adam’s pictures were taken from different positions and heights. 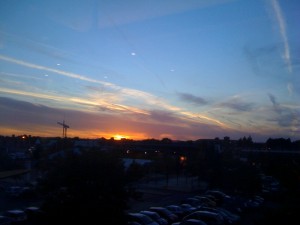 Doing a little research on the net it looks like this is not a unique phenomenon,

It goes on and on.

No comments yet
UFO